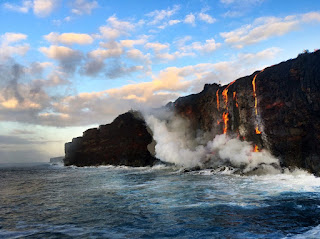 Hiking close to the volcano can be life threatening for tourists in Hawaii. Therefore boat tours are also making trips to the site to view the lava flow entering the Pacific ocean.
The U.S. Geological survey reported this week that 2,000-degree lava from the Kilauea volcano on the Big Island of Hawaii made its way across part of the island of Hawaii's Volcanoes Park, and met the ocean for the first time since 2013.
The lava exited the volcano at a vent called Puu Oo and crossed an emergency road before meeting the coast.
Posted by Diane Domiano at 5:44 AM No comments:

SANTO DOMINGO, Dominican Republic - Home to nine different ecozones, Dominican Republic's natural contrasts provide a bevy of breathtaking nature for visitors to explore. The country's natural diversity and varying climates create the perfect eco-playground for all nature enthusiasts.
"Dominican Republic's natural features extend far beyond the beaches we are best known for," said Magaly Toribio, marketing advisor for the Dominican Republic Ministry of Tourism. "From lush green jungle to arid semi-deserts to pine-covered mountains, our country truly does have it all."
A land of striking contrasts, the country is home to both the lowest and highest points below and above sea level in the Caribbean. Lake Enriquillo is a scientific marvel situated in a rift valley. This saltwater lake is both the largest lake and the lowest elevation in the region, at 45 yards (42 meters) below sea level. The lake is a designated Ramsar Site and is best explored by boat, allowing visitors to take in the spectacular sight of the wildlife refuge featuring tropical birds, flamingos, two types of iguana and American crocodiles.
To the northeast of Lake Enriquillo stands Pico Duarte, the highest peak in the Caribbean at two miles (3,087 meters) above sea level.
The peak is accessible by two- to four-day treks from nearby Jarabacoa, allowing travelers to take in magnificent panoramic views once they arrive to the top. In Jarabacoa, visitors can also enjoy a cool mountain climate that provides a welcome reprieve from warmer conditions in other parts of the country. By contrast, the sand dunes in Baní—about an hour from the capital of Santo Domingo—offer a desert-like atmosphere, spanning over 9 miles (15 km) and reaching heights up to 115 feet (35 meters). Tourists can explore the dunes by foot, but good shoes are recommended, as the sand can be hot.
For even more stunning bird's-eye views, a cable car journey to the top of Mount Isabel de Torres in Puerto Plata is a can't-miss. A massive statue of Christ and a botanical garden also await visitors at the top of the peak.


Dominican Republic is home to another extreme: the shortest river in the Antilles. Los Patos River in Barahona, named for its large populations of ducks, is the shortest river in the region and one of the shortest in the world. By contrast, the Yaque Del Norte River is the longest river in the country, winding from Jarabacoa up to the far northwest corner of the country in Montecristi.
For a comprehensive showcase of Dominican Republic's natural diversity, look no further than the national parks. The lush Los Haitises National Park in Samaná features mangroves that can be explored by boat and ancient pictographs from the Taino Indians preserved in caves. On the opposite end of the country, Jaragua National Park in Pedernales is characterized by dry forest and scrub.
Jaragua is the largest protected area in the Caribbean and is home to several ecosystems including natural forests, wetlands and coral reefs. In the center of the country, Valle Nuevo National park in Constanza offers spectacular bird watching and mountain trekking, along with cool temperatures and pine tree forest—perfect for camping. The park features a vast array of elevations and a diverse assortment of plants and animals, with 531 plant species and 145 wildlife species. In the northwest corner of the country, Montecristi National Park's dry, subtropical forest landscape is surrounded by mangroves that can be explored up close by boat or on foot through a network of inland waterways. Visitors can also explore a cluster of small islands within the park and take advantage of the coral reefs for snorkeling. Montecristi National Park features three categories of protected areas, offering an assortment of unique natural wonders within the park.
Animal lovers will be in heaven while exploring the country's fauna, which boasts greater diversity than any other country in the Antilles region. More than 250 species of birds call the country home, 22 of which are endangered species. The American crocodile, the Ricord's iguana, the hutia and the solenodon are among the more than one thousand species of reptiles, in addition to 60 species of amphibians. The Samaná Peninsula on Dominican Republic's northeast coast offers the opportunity for unparalleled whale watching between December and March, when humpback whales migrate to the bay en masse.
Dominican flora includes more than five thousand plants, many of which are endemic and can only be found in the country. Among these endemic species are the royal palm and the pine, while within the native species there is tobacco, pineapple, the kapok and the mahogany tree, among others.
Both in the upper reaches of the country, as well as in the plains, there are a large variety of areas where nature expresses itself in different and extreme forms, from luscious tropical forests to arid deserts
.
Posted by Diane Domiano at 4:56 AM No comments: 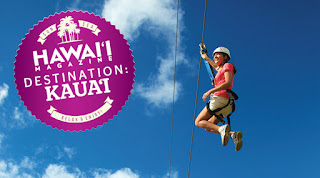 
by: HAWAI'I Magazine | Jun 30, 2016
Kauai, the fourth largest of the Hawaiian islands, is fondly known as the Garden Isle. Travel beyond its pristine, sandy shoreline and it’s easy to see why. Though prized for its crowdless, palm tree-lined beaches, Kauai is also home to one of the wettest spots on earth. As a result, much of Kauai,especially the island’s interior, is flush with waterfalls and garden-like greenery. If you’re looking to experience the rugged charm of the jungle, Kauai is where you’ll find it.
With 70 percent of the island inaccessible by foot, an aerial tour makes for the perfect start to your Kauai experience. At Skyline Eco-Adventures, you’ll have the unique opportunity to sail above the canopy, taking in spectacular views of some of the island’s most verdant mountain valleys. Located in Poipu on Kauai’s sunny South Shore, this zipline tour company is equipped with eight thrilling lines. You’ll feel right at home among the towering volcanic peaks as you tackle exciting features, such as a 200-foot drop-off and a walk-the-plank jump.
Now that you’ve seen Kauai from the sky, it’s time to experience her unique beauty by sea. Boating is one of the only ways to view the majestic Na Pali Coast, a 17-mile stretch of sea cliffs that separates the island’s desert-like West Side from its lusciously green North Shore. Kauai Sea Tours, located in Eleele, offers two distinct boat tours. For those who prefer smooth sailing, there are snorkel or sunset dinner cruise options aboard the Lucky Lady, a 60-foot luxury catamaran equipped with a water slide, bar and buffet service, fresh water showers, a sundeck and shaded seating. Folks with an appetite for adventure, however, might prefer a bouncy ride aboard a 24-foot ocean raft, which can navigate sea caves, duck under cliffside waterfalls and land at the remote beach at Nualolo Kai for an unforgettable picnic — weather and ocean conditions permitting.
Before you depart Kauai’s West Side, fuel up for your next adventure at Kauai Coffee, a gorgeous coffee estate that offers orchard walking tours and tastings. Kauai Coffee is Hawaii’s largest coffee grower, with more than 4 million coffee trees grown on 3,100 acres in Kalaheo. Be sure to stop in the gift shop and spend a moment relaxing on the veranda with a fresh-made cup of java.
When the sun sets on your first full day of Hawaiian adventures, you’ll be eager to lay your head to rest somewhere that captures the island’s rare and beautiful character. At the Hanalei Colony Resort, you’ll find seclusion and serenity in accommodations that blend seamlessly with Kauai’s natural beauty. These oceanfront condo rentals on Kauai’s jungle-like North Shore are equipped with full kitchens, private lanais and large picture windows. Built in the traditional low-rise plantation style, each unit has an open, airy ambiance as well as stunning ocean and mountain views.
As you explore your new neighborhood, be sure to pay a visit to the Honolulu-based resort wear company Tori Richard. This fashion brand’s contemporary twist on the iconic aloha shirt has been worn by the cast of Hawaii Five-0 and George Clooney, earning hanging space in the closets of Hawaii locals and visitors alike. Located at the luxurious St. Regis Princeville Resort, Tori Richard carries clothing for both women and men, including bold print pants and dresses as well as artfully made swimwear. Soon enough you’ll be able to visit their two new locations right at the Kukui’ula Village Shopping Center and the Grand Hyatt Kauai Resort and Spa.
In the evening, show off your new tropical threads at a traditional Hawaiian luau. Hosted by the Smith family of Kauai’s stunning Wailua River Valley, Smith’s Garden Luau has been delighting visitors for over 50 years. Complete with a pig roast, ukulele music and hula, the evening begins with a stroll of the 30-acre garden grounds and a chance to witness the cooking of a kalua pig in an earthen imu oven. In addition to kalua pork, dinner features local favorites, such as beef teriyaki, chicken adobo and fresh-caught mahi mahi. After the feast, grab yourself a Mai Tai and enjoy the show!
If you’re on Kauai during Koloa Plantation Days, consider yourself in for a treat. Held where Hawaii’s first sugar plantation was established in 1835, this not-to-be-missed celebration of plantation culture spans 10 days starting July 22. Lively and family-friendly, the annual event spotlights Koloa’s natural history as well as the cultural traditions introduced to Hawaii by the ethnically diverse plantation workers who moved to the islands from around the globe. Festival highlights include rodeos, barrel racing, fire dancing, fishing, guided coastal hikes, a miniature golf tournament, traditional food and live music.
Posted by Diane Domiano at 1:46 PM No comments: